We launch a new release of alfanous website, today the 4th of August 2013 Corresponding to  the 26th of  Ramadan 1434 after the work of months. The release is named "alyaqoot" and dedicated to 01walid (Walid Ziouche) for the push he gave to alfanous project and his immense efforts in this release. It introduces a new simple look for the website that make it easier for users to surf. It includes the responsiveness feature so the website works fine for different screen sizes including tablets and smart phones. In addition, the website now accept many styling skins. You can use the website in 5 languages:  English, Arabic, French, Indonesian, Japanese. Though, the website can be translated easily to more languages. This website got, May 2013, the award of the best religious website in Algeria Web Awards 2013. 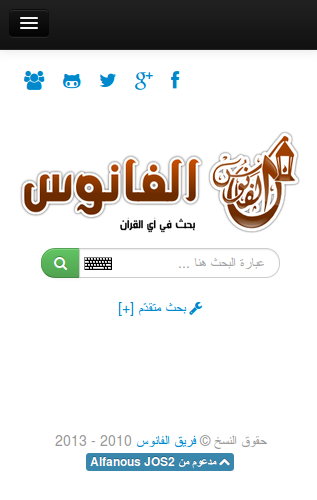 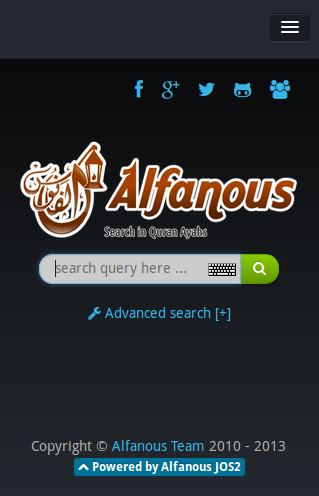 Alfanous, by the way, is a free libre open source project of  a functional, dynamic, comprehensive Qur'an search engine that has been effectively designed to carry out simple or advanced Quranic searches. Alfanous uses a contemporary, highly developed approach to retrieve vital information, enabling stable efficient, speedy searches to be conducted.

Contributors of this release are:

The complete list here contains contributors of the whole project including different interfaces and releases.